You are using an out of date browser. It may not display this or other websites correctly.
You should upgrade or use an alternative browser.

Born in Chicago, Pat graduated from Ray High School in Corpus Christi and attended the University of Houston.

Pat and her husband Bill founded Bradley’s Art & Frame in 1970, opening a small shop; two years later, they moved into a 1,200-square-foot space.

Bill kept his day job, coming to the shop at night to make frames. Pat ran the store during the day, going home to the kids at night.
In 1976, Bill quit his day job and they doubled the size of the shop. Within six months they hired their first employee. In 1987, they moved to a brand-new building; and in 1998 expanded to the existing 5,000 square feet.

Pat was responsible for administration and marketing, writing the company newsletter, and sharing over 40 years of experience with customers at the front desk. She researched and developed many of the techniques used on framing textiles — needlework and clothing. She taught many workshops to other framers, sharing these techniques.

Pat and Bill were very involved in their local PPFA Chapter.

Pat served on the original PPFA Certification Committee that wrote the original CPF (Certified Picture Framer) test; and both she and Bill earned the CPF designation.

In 1993, the couple was honored with the Paul Frederick Award of Distinction for Leadership; and in 2010, received the PPFA Lifetime Achievement Award.

A requiem mass will be held Jan. 14 at the Cathedral of Our Lady of Walsingham in Houston. 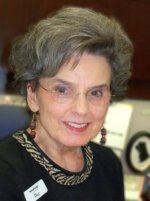